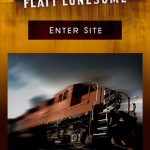 New Website!
You heard that right! We have a brand new website, and we are so excited about the new look! It’s mobile friendly – see that screenshot – so whether you’re at work, home, or on the go, everything you want to know about us is right at your fingertips! We’ll be keeping it updated with regular news and photos, so be sure to check it often! 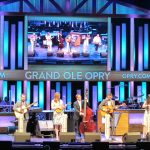 Grand  Ole Opry Recap!
To say we had a fabulous time at the Grand Ole Opry when we made our 13th appearance on September 6th — well — that would be a huge understatement! We were so honored to take part in a meet & greet for WSM 650AM backstage in the Opry Green Room and to also be interviewed on WSM by our new friend Eric Marcum! We got to hang out with some of our music heroes — Mark Wills, Lee Greenwood, Phil Vassar, and Jeannie Seely — and were once again introduced to the audience by the always amazing Eddie Stubbs. It was definitely a night to remember! We’ve posted some photos on our website here, and we shared some live video on Facebook, too! Thanks to each of you who joined us in person, tuned in online, and listened in on WSM! 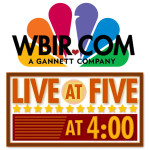 On TV
If you happen to live in the Knoxville, TN viewing area, be sure to catch us on WBIR Channel 10 on Thursday, September 15th. We’ll be performing on Live at Five at Four, promoting our appearance later that night in Dandridge, TN for Music On The Town and also our shows in Kodak, TN on 9/16 for Dumplin Valley Bluegrass Festival. 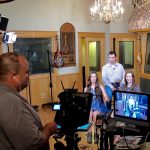 We recently taped four episodes of Bluegrass Ridge, a new television show showcasing videos from our favorite Bluegrass stars! We had a great time filming with Brian Covert of CJM Productions and we appreciate the opportunity to host these shows. The next two will air the week of September 12th and September 19th. for more information, including TV stations that carry Bluegrass Ridge, click here. 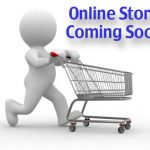 New Cyber Store Coming Soon!
Now that we have a new website, what better way to unveil our new merchandise than right here online! Our cyberstore is nearing completion with all our music, hats and t-shirts. Right now, you can visit the cyberstore and order all three of our CDs. And coming VERY soon, we’ll be adding our other merchandise as well. We are so excited to share this with all of you, and once our cyberstore is complete, we’ll be offering special, limited-time-only, discounts on many of our items. Stay tuned to our website, Facebook, and Twitteraccounts for all the details! 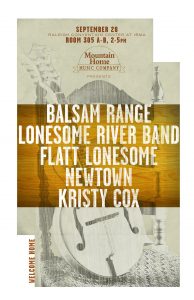 IBMA’s WOB – Just Around the Corner…
One of our favorite times of the year will be here before you know it! We’re talking about IBMA’s World of Bluegrass in Raleigh, North Carolina, of course! We’ve got a packed schedule that includes performances, panel discussions, awards shows and tons of jammin’ fun! One thing we’d love for you to make plans to attend, is the annual Mountain Home Music Company Showcase. It’s an opportunity for us to work with some of our best friends, and label-mates, in Bluegrass. Here are the details for that show along with all our other public appearances in Raleigh!